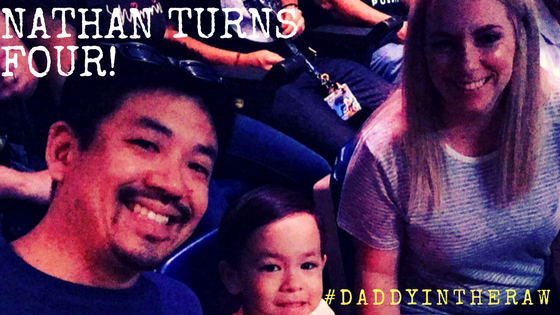 Nathan Turns Four Years Old (and, some other stuff!)

Nevertheless, it’s a good time to share some good times. Here’s a snippet:

So, the general idea of the “Keto diet” is that you are changing the way your body burns calories. Instead of just calories in vs. calories out, the keto approach is burning the right calories out. In this case, the theory goes that our bodies process high carb diets to a detrimental fashion with blood sugar spikes, insulin issues, type II diabetes, etc.

The keto approach lowers the caloric profile while satisfying the body’s nutritional needs with higher calorie profile fat and carbs; and, within the approach I was following, as long as I held to my macros (ration of macro nutrients broken down by carbs v fats v proteins, I was good to eat whatever throughout the day).

BTW. My macros were <30g carbs; 120+ fat; 120- proteins. No cheat days for 7 weeks. The first week was AWFUL. I felt like I had no energy whatsoever. I lost 8lbs in 10 days, all water weight. Then, the weeks passed by and started noticing a rapid decline in my waistline, losing two belt loops within 4-5 weeks.

Due to Nathan’s birthday festivities, I’ve given myself a small break. However, I will be jumping back on this diet soon after.

You all know I’ve been studying Brazilian Jiu Jitsu at Rebellion Martial Arts. Well, around April of this year (2017), my professor/instructor/coach, Jeff Baldwin, was able to open up a Muay Thai program under the World Thai Boxing Association flag. As a Jeet Kune Do instructor, he’s also studied Muay Thai for many years… it’s just never become a formal element at Rebellion ’til recently.

I was also privileged to attend a recent seminar held by Ajarn Chai, the founder of the World Thai Boxing Association.

All together, I’m loving the Muay Thai experience and hope to dedicate myself to getting some form of assistant instructorship in the coming years.

This will be amazing ?!! Come join us for the best Muay Thai training with an amazing teacher!

The Boy Is Four

It’s CRAZY how fast time flies. Suffice to say, Nathan is four and he’s a big boy now. AND… He’s apparently tall enough to ride all but two of the big kid rides at Disneyland.

Yup, on his actual birthday, we went on Star Tours where Nate was the secret rebel spy!

E-PIC! There was a lot more to the day; but, that’s family times 🙂

My Boy Got Sick 🙁

And, then… last night at 3am, Nate woke up violently sick and threw up… everywhere. And, this kept happening. Over… and, over. The poor kid was a total champ. He’s always been so brave and emotionally contained, particularly when he should be freaking out. LOL, which means he freaks out over nothing from time to time. It’s a balance 😉

What my wife and I learned last night is that teamwork best happens not when everyone member has the same role. No. It’s best when each team member has specific responsibilities that compliment the situation and each other — that way, you’re not redundantly strong nor redundantly weak;  your bases are covered and your family is cared for.

Oh, yes… in the meantime, I’ve been traveling all over the place, booked to speak at multiple conference — even an NIH sponsored event. It’s kinda crazy that all this is working out. But, it’s almost expected with the support I have from my family, friends, business partners, an encouraging collegial community, and my rebel-fam at Rebellion Martial Arts… a special shoutout because they mean the world to me!