Today’s product review is sponsored by The Pelvic Clock™.
While some of you may read my professional audience Blog @DrBenFung, I know many of you come from the parenting audience. And, if you’re like me… kiddo is HEAVY. AND, picking up heavy all throughout the day = sore back. So, I thought to share this product with you guys. I’ve messed around with it a good deal; and honestly, it’s a LOT of fun. What’s more, it’s one of those simple solutions where it’s hard to cheat, easy to get results, and no where near dangerous for babies/kiddos to be messing around with. Safety First!
As with many inventions, the Pelvic Clock came out of personal necessity. Founder & CEO Yana Blinova created the Pelvic Clock during a time when she was told her spine was so of whack, that her only hope was spine surgery. Being an olympic coach, she knew the power of Physical Therapy… both professionally and personally. Both her parents were olympic coaches; and, one of her twin brothers — being born with clubfeet — experienced transformative improvements through Physical Therapy.
Refusing to give up, she looked around her house for ANYTHING she could use to augment therapeutic exercises and alleviate her low back pain. Fashioning a broken pot lid & a towel for padding, she performed the popular Pelvic Clock exercises and felt immediate relief across her sacroiliac joint & low back.Not thinking much about it until far later when her many clients urged her to produce the Pelvic Clock as formal product, she went to work on design and production. After numerous revision and manufacturing intensities two years in the making…

The Pelvic Clock™ is proudly made in the USA!

It’s a rather intuitive device with a truly comfortable material texture. It isn’t too hard, nor is the height of it impossible to appreciate in terms of spinal extension. It is also more intuitive (to me at least!) with the explanation of the Pelvic Clock exercises as well as the proper muscle engagement in performing the pelvic clock exercises as a whole.

Yana and I had a wonderful conversation together and remarked on both the portability (for home health), the ease of use and simple patient education, and of course, the fact that it can be utilize in the clinic as ther-ex. The Pelvic Clock can be used on a hard surface, a soft surface such as a mattress, and even against a wall… which was, as Yana recalled, how a pregnant Physical Therapist used it the first time she was introduced to the product.

Through personal use of the Pelvic Clock, I was truly impressed by how HARD it was to cheat. Typically, with supine core exercises, it’s easy to engage with the lower extremities to feign substitute and compensatory movements. However, I tried… I mean, I REALLY TRIED to perform a posterior pelvic tilt with the lower extremities… No Go. However, *BOOM* with core engagement… PPT #Done.

The Pelvic Clock is highly rated on Amazon — and — I agree! It’s a solid product. Feels really nice. Is quality material. And, is made in the USA! I can see this useful in the clinic as a foundational exercise for low back concerns. And, since the exercise is rather self regulating, it can also be used much like most warm up exercises are in the clinic in terms of maximizing time management & productivity. Of course, that’s after a patient has demonstrated proper exercise technique 😉

I’m very pleased to present the Pelvic Clock with my recommendations. While the price may be seemingly high; the quality it presents with, the ease of use, and the fact that is made in America earns it my thumbs up! 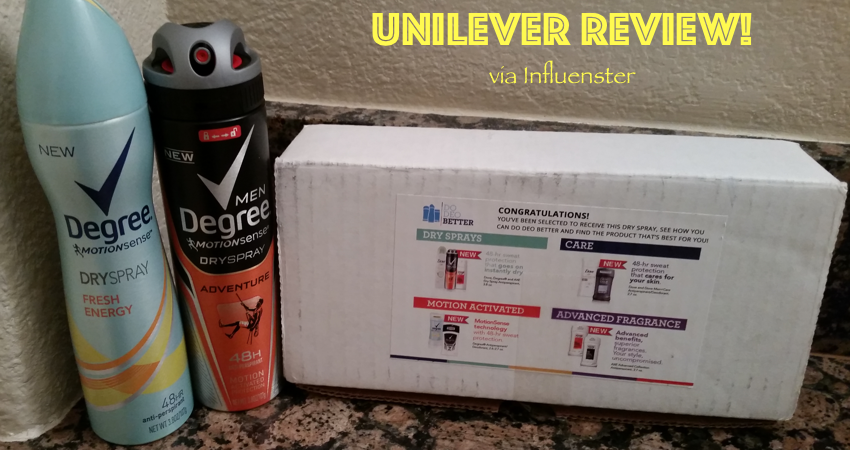 So, as you know, one of the things I do on this site is product reviews. And, one of the venues to which I

do this is via Influenster. After unboxing the products, I failed to realize that the light blue dryspray deoderant was actually designed for women. *womp womp*

Nevertheless, I characterized it as “light and fresh” vs. the more robust essence of the men’s “adventure” spray.

Well… they pretty much said right! I put it on a day before I went to train Brazilian Jiu Jitsu. And, after 20 minutes of hard rolling (aka sparring), I came home expecting to smell like… yeah. Well, I only partially smelled like… yeah. 48 hours may be a bit of a stretch. You could kinda appreciate the remnants of the dry spray trying to help out my odiferous situation. 36 hours is probably a bit more like it.

Nevertheless, it’s a nice product. I like that it is indeed a dry spray. And, it does smell nice. Thanks to Influenster for sending me some goodies to review.

Until Next Time!
-Ben

The Best High Chair Ever

Here’s a Sunday post with a Thursday spirit! #TBT

This post is about the very best high chair… EVER! It’s super safe. It’s ridiculously versatile. And, it is truly durable. Here are some snapshots of what it looks like: 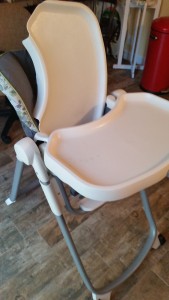 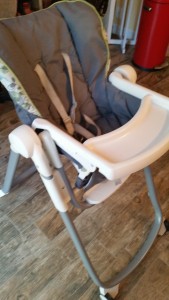 First, you’ll notice that the tray comes off and the tray itself even has a liner. This is super nice for cleaning. And, it is ridiculously multi-purpose. You can use this for eating, crafts, playtime, etc. It’s super usesful. 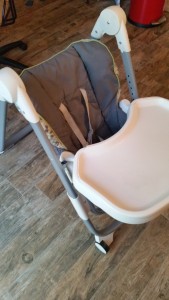 This is the lowest it can go while still seating a baby… just in case you have a mover, shaker, and otherwise escape artists. You can have it THIS low without worry of the kid shaking the chair to topple over. 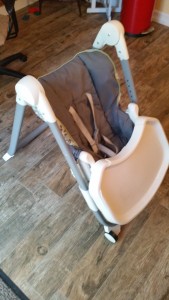 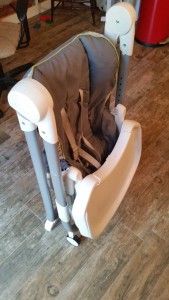 It also folds into a razor thin profile. The chair back has three reclining settings. And, you’ve seen the height difference from totally lowered to the highest position. It’s really nice. The fabrics all come off so you can wash them in the machine when they get dirty. There are several slots to change the height of the shoulder straps as your baby turns into kiddo mode. It slides around on the carpet and tile floors very easily. And, has a very effective brake system. I can’t speak highly enough of this product. We did a lot of research before we bought it and we have been happy ever since.

Are you shopping for a high chair?

So… childproofing locks were a fun challenge when I finally had to go about it.

First, let me say, there are babyproofing locks…. and, there are babyPROOFING locks. Here’s an example of a lock that did NOT work out. Why, you may ask? Because, when I gently rattled them to check for physical integrity, the entire latch broke off.

As a result, I frantically started searching for the strongest, best reviewed locking mechanisms out there. Only two rose to the mission of keeping our son out of places he didn’t belong.

And, the runner up!

At the end of the day, these two products were the only ones that actually kept our son out of those danger zones.

The magnetic locks are perhaps the best locking products I’ve ever seen or dealt with. However, I must warn you that the installation process is a HUGE PAIN. You have to screw in 4 separate screws and do lots of measuring — PER LOCK. And, because of the size of them, it’s difficult to install for smaller drawers and cabinets. Nevertheless, it is 100% worth it once it is done.

The zip-tie style lock for doorways and swinging cabinets is actually pretty effective. Nathan basically got bored of being frustrated trying to open them. Whenever he sees the lock in place, he knows it is locked and leaves the area alone. It actually works wonders for my office door since it is a double door.

Suffice to say, when it comes to your baby’s safety… you get what you pay for AND you get what you are willing to work for. The magnetic locks are expensive and a series chore to install. However, I can guarantee you that even you will have issues getting into areas — that is, unless you remember to bring your magnetic key 😉