There’s This Thing About Barbecue (BBQ)

I love food. This is no secret. During 2018, I finally stumbled across BBQ that I truly found amazing — Iron Pig Alehouse.

In San Diego, we have this place called Phil’s BBQ. Most people love it. I like them well enough, but wasn’t as emotionally impressed as so many people talk about it. Heresy, I know 😉

Nevertheless, I stumbled across some BBQ YouTube videos (later to be linked)… and, saw something called Texas style BBQ Brisket. It intrigued me.

Juicy. Beef. BBQ smoke flavors. Not dry. Not over sauced. Done deal… IF, it held up to its reputation. Iron Pig, did.

Hence, started my journey of rabbit holes on how to best do BBQ at home. Now, this started back when we were still in the condo — and, their HOA rules did NOT allow for wood fires. Sad beans. Fortunately, as will be explained in a later post today (this New Year’s Day 2019 super release series)… we moved! AND, I got myself a BBQ offset smoker.

Here are some of the early results.

Reflecting On My Home BBQ Results:

BBQ videos. Here are some of my faves:

How much is this method of cooking is art or science or honoring the legacy of the past? Probably a bunch of all. Ultimately, barbecue is generally accepted to have been around since human’s have eating meat over fire. Nevertheless, it’s fun to tinker with… try… fail… try again… and perfect one’s method to making some wood fired meats.

There are fewer soups as simple and as sublime as French Onion Soup. And, as we are in Winter… there are fewer soups that are so comforting. As I look back on my mastery of this wonderful taste, I’m recalling how my roommate in college (to this day) still recalls the entire summer where I bombarded a whole city block with the smell of onions — perfecting that soup.

Well, today…! I’m going to share with you a video demonstrating how to cook French Onion Soup. A video that will only take 5 minutes of your time; but, will render you years of your taste buds thanking you for watching.

So, if you don’t already know me, there is something you will quickly learn about me on this blog.

And, I love to cook it… probably more. My wife thinks I’m insane. Cooking absolutely stresses her out; but, for me, cooking is a freedom, an art, and an experience to create marvelous things to titillate the senses. This dish is something I hijacked from Disney’s California Adventure from the Disneyland Resort. We stumbled upon this little area in the far corner between the Grand Californian and Paradise Pier. It’s called, Boardwalk Pizza & Pasta. The food was so good that my wife went back for a 2nd serving! LOL… so, naturally, I wanted to figure out if I could replicate it at home.

This post is all about how to make this dish for less than $3.99 dollars in cost per serving!

So, when we spin this all down, I only use 6-7 pieces of ravioli which comes down to $1.50 in serving cost. The cheese, is negligible and we’ll call it $0.25 as is the balsamic vinegar which we’ll call a similar point of cost. When you add all this together, you’ll get just under $4 in material costs. So, with all that said, it’s time to cook! 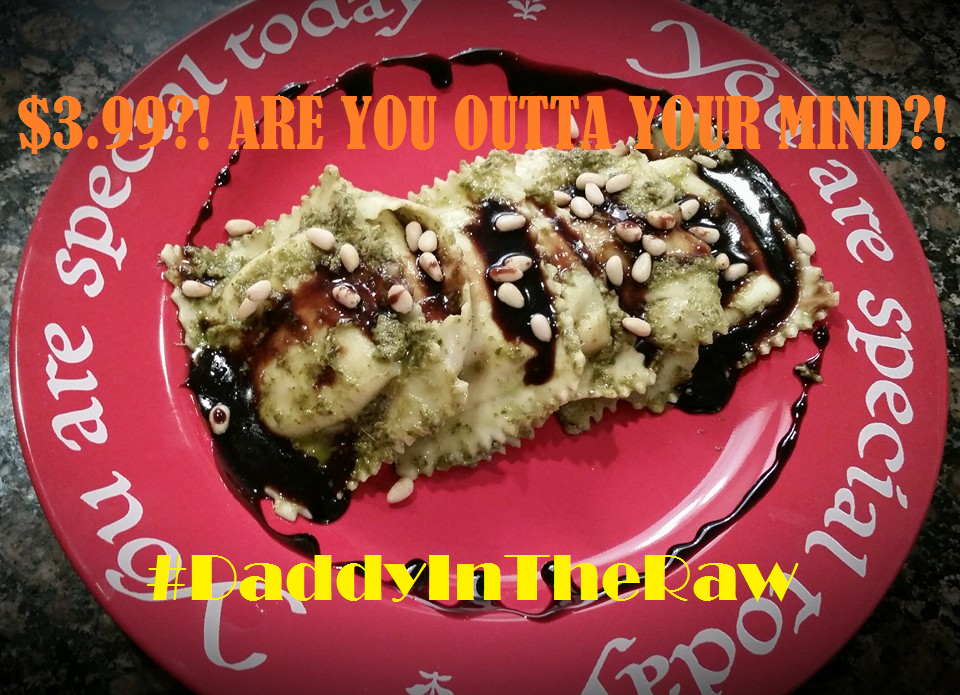