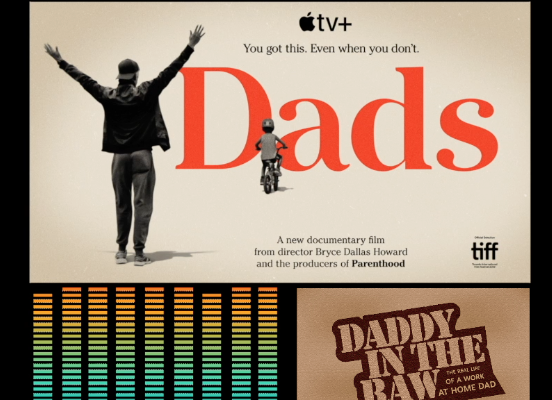 So… a little while ago, I received an email via this blog asking if I’d be interested in screening a film and potentially being a part of a roundtable interview panel for Bryce Dallas Howard.

In case you’ve been living under a rock… lol, whatever, we’ve ALL BEEN LIVING LIKE THAT… #COVID19… BUUUUT, we’ve also had access to streaming services. ?

You know her. She’s incredible; as an actor, director, and producer. If I listed her accomplishments, that’d be the entire blog.

So. ONWARD: I had my “Why, YES!” moment — and, got to screen the film late into the evening… with a teary pillow, LOL. It was a marvelous production.

Dads on Apple TV+ is Bryce Dallas Howard’s feature directorial debut. That was of particular interest to me; which became my question for her during our roundtable interview.

There is SO much to be said about the documentary — but, #NOSPOILERS.

So… I’ll leave you with this, and a few choice clips from interviews and trailers below, with my heartfelt encouragement to watch this film for Father’s Day 2020.

“Dads” is a celebration and exploration of the modern-day dad.

It’s a raw look that brings moments of joy, tears, and most importantly…shows them many ways a dad can be dads — fulfilling their role as Bryce said, as a caretaker.

And, while that in and of itself may not be “exciting or eventful” even per Bryce’s own words. Being a dad isn’t necessarily glamourous.

HOWEVER, what Ms. Howard masterfully depicted in her documentary is how incredible that one word can be.

This film shows how profound that one word…

How fun that one word…

How ridiculous that one word…

How dedicated that one word…

How devoted that one word…

And, how reviving this one word now has become for the modern day dad.

To me, a dad is one who is their child’s champion and true north in living their best life.

It was a wonderful production.

It carried diversity in thought, in spirit, in representation… and, most importantly, in “how dads do.” — imagine it from the voice of Ze Frank [example click here… not necessarily fully appropriate for work/kids ?].

With that, a big shoutout to Boutique Publicity for including me in this remarkable experience.

Here’s a clip from our dad + mom blog roundtable

And… an interview bit with Bryce Dallas Howard